No-one could argue successfully that the best way to build a house is from the chimney down.

It's just as unlikely that a person could state with any real credibility that starting with the roof instead is a wise move. Or the walls. Or even the floor. It is a universally accepted fact that foundations need to be in place before anything else of use can be constructed.

Now substitute the word 'chimney' for 'hip-hop', then 'roof' for 'modern folk', change 'walls' to 'country', and finally 'floor' to 'rock and roll' Now realise that none of these would likely exist in the form we know them without the immovable foundation they were all built upon: the blues.

Nearly all popular music today, and for most of the last century, has its origins in the stifling hot cotton fields of the southern states of the USA, where black slaves from Africa, and later emancipated ‘croppers’ would work the land singing evolved versions of traditional African farming songs. Once this rhythmic chanting developed into a recognisable version of what we now call the blues sometime in the early 20th century, the inextricable link between this music and black culture was firmly established.

Inevitably, though, the entrenched racism aimed at black people that had already been established through years of slavery and the Jim Crow era also became intertwined with the rise of the blues. 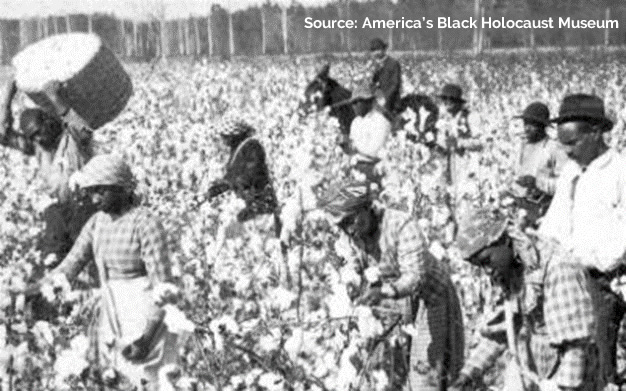 The roots of modern-day incidents of racism in the USA that we see all too often on the news can be traced back through white generations to this era and beyond. Black people were treated like third class citizens, often no better than animals, made to work harrowingly long and exhausting hours, and regularly subjected to false accusations of theft and rape, amongst other crimes, which sadly led to numerous beatings and lynchings.

Yet despite this unjust and lasting prejudice against its innovators, the blues grew in popularity, with white people of the early 20th century more than happy to marvel at this new style of music whilst conveniently disregarding and marginalising its black creators. Early blues performers such as Charley Patton and Lead Belly were acclaimed as musicians but still treated terribly, often viewed paradoxically as both genuine innovators and curiosities to be gawked at.

Sadly, this attitude did not change much over time, only becoming more subtly disguised as the years progressed. This resulted in a somewhat insidious undertone of racial tension and injustice within the music scene.

As the blues evolved, the biggest stars to sing both straight blues and subsequent variations of the theme were typically white. Of course, most people have heard of B.B. King and Muddy Waters, but when placed next to the likes of Elvis Presley, The Rolling Stones and Lynyrd Skynyrd, even today they occupy something of a runners-up place. Regardless of the level of fame they achieved, it often was not as mainstream as that of their white counterparts. It is very likely that the average music fan could name more Elvis, Stones, and Skynyrd hits than they could B.B. King or Muddy Waters – two performers who were there in the early days as blues music really took off. It is a sad fact that a song like ‘I Can’t Get No Satisfaction’ is more widely known than King’s ‘You Know I Love You’, and it is truly a shame that the music of Muddy Waters and B.B. King’s forefathers was only really made popular in the mainstream by white folk.

The theme of white people utilising black music and subsequently using their societal and economic advantages to promote it more successfully whilst concurrently subjugating and marginalising the black folk to whom the music arguably truly belonged continued throughout the 20th century. A classic example is the treatment Sammy Davis Jr. received as part of the famous Rat Pack ensemble of the 1960s who were known for singing swing numbers, originally a variety of jazz music and itself derived from early blues. While the black Davis was unquestionably admired for his prodigious ability and breadth of talent by the majority of swing music fans, it was undoubtedly the white Frank Sinatra who got star billing in the group. And it was Sinatra who repeatedly had to stand up for Davis, who would be refused entry into clubs and after show parties even during the height of their fame, whilst Sinatra and Dean Martin would be welcomed without question. Even John F. Kennedy refused Davis access to perform at the White House due to the fact he was married to a white woman.

As time has marched on, myriad other injustices have raised their heads and racial inequality in music has remained true to its segregated past. From the continued rise of rock music through the decades popularised by predominantly white bands (see Led Zeppelin, The Eagles, and Aerosmith, with only an occasional band such as Thin Lizzy featuring a predominant black performer), to the popularity of white country stars such as Dolly Parton and Kenny Rogers, through the emergence of other genres, most types of popular music for almost a century now have been dominated by white performers. Arguably in recent years, black performers have experienced more acceptance and a version of equality - notably from the 1990’s onwards - with the rise of rap and hip-hop (N.W.A), R&B (Beyoncé), and various types of pop music. However, racial injustice in music still occurs. Take the recent hit ‘Old Town Road’ by Little Nas X, which was kicked off the Billboard Hot Country music chart in the USA because, many argue, Little Nas X is black and not welcome on the country music chart. And count how many black artists have headlined the world-famous Glastonbury festival – Stormzy last year was, in fact, only the second after Skin from Skunk Anansie in 1999. Sadly, numbers do not lie.

Racial inequality is still an issue in music. Take a look at this Business Insider list of the 50 bestselling artists of all time https://www.businessinsider.com/best-selling-music-artists-of-all-time-2016-9?r=US&IR=T#1-the-beatles-183-million-units-50 and count how many are of African descent. There are only four - Tupac Shakur, Whitney Houston, Mariah Carey, and Michael Jackson. Only four, out of fifty. And notably, not one black blues artist. Despite improvements in promotion and acceptance of music of black origin in the last couple of decades, much work still needs to be done. Music production is dominated by white people, music businesses are dominated by white people, media is dominated by white people – it is always an uphill struggle for black artists to be at the forefront of music.

And all this despite the fact that most modern music derives from simple, chanted work songs from the fields of southern US states. Chants half remembered from ancestors ripped from their homelands and forced across the Atlantic to work for the white man. The same white man who took that music and made it his own without even asking.

As Radio 1 DJ Clara Amfo recently, and so evocatively, elocuted live on her show after the turmoil surrounding the death of George Floyd moved her to make an impassioned speech:

"We - black people - get the feeling that people want our culture but they do not want us. In other words: you want my talent but you don't want me. You cannot enjoy the rhythm and ignore the blues".