The 2019 Dereham Blues Festival was without any doubt the greatest yet!.

It started with this guy called Hamilton Loomis, a name hardly anyone had heard of a year ago, but what an explosive performance by a young talented musician who, with his band, entertained the gathered throng with some wonderful original and classic blues songs (not least the Led Zeppelin compilation which was stunning). To top it all he is such a nice guy and an inspiration to young aspiring guitarists to embrace blues guitar and the genres created from the blues.

And it didn’t finish there! With great weather and the town buzzing we had some super local, national and international bands who gave some fine performances and were enthusiastically received by the crowds of revellers attending the festival. 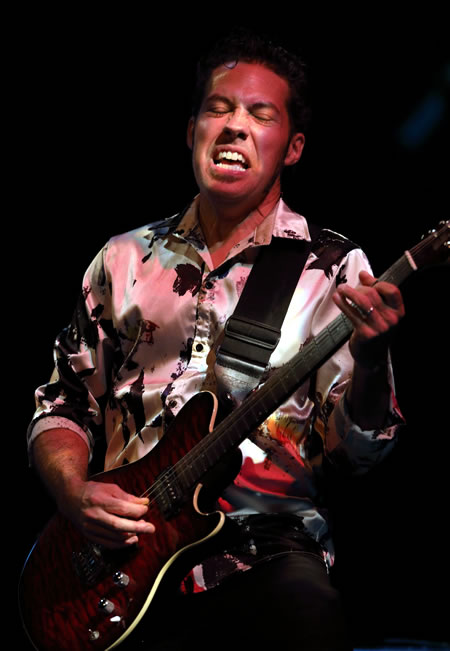 The 6th Annual Dereham Blues Festival was propelled to a superlative start in the Town’s Memorial Hall last night by the legendary Georgie Fame and The Family Trio. Making up the trio are Georgie’s sons Tristan on guitar with brother James playing drums and together they performed an enthralling show, documenting Georgie Fame’s career spanning nearly 60 years in the music business. Tunes from every decade, including of course all the hits (Yeh Yeh, Bonnie and Clyde) were set in context by the man himself with genial and illuminating anecdotes between the numbers. There were great songs by influential performers and writers like Booker T, Ray Charles, Mose Allison, Hoagy Carmichael, Floyd Dixon and Peggy Lee and even a spot of country with He’ll Have To Go – a nod to Jim Reeves via Ry Cooder.

The Hammond organ is an extraordinarily expressive instrument and Georgie knows exactly how to handle it. He just touches the keyboard and the stage infuses with the blues. His still-strong voice is instantly recognisable too and his songs were delivered with a deeply imbedded blues tonality supported attentively by Tristan and James. The brothers are both musicians with a stature matching their dad’s and in the second set Tristan’s rendering of Hendrix’s Red House, was a tour de force, totally fitted to the opening gig of the Dereham Blues Festival. 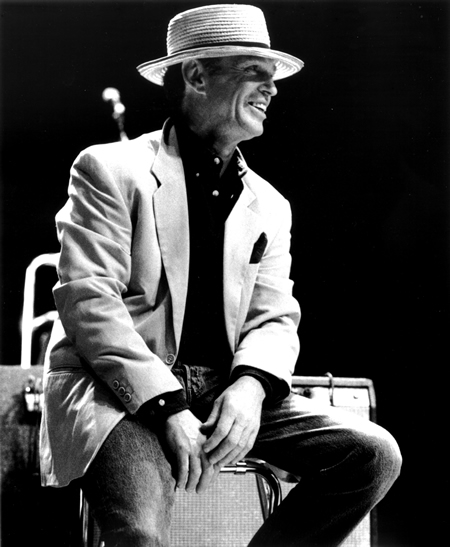 The Dereham Blues Festival enjoyed “another stellar year” in 2017 according to the press coverage of the event. Thousands flooded into Dereham to enjoy bands from across the country. “2017 was the event's fifth year and, as every year, the festival launched with a sensational, sell-out opening concert. The only ticketed gig at the festival, the opening concert always features a major blues talent to kick off the four day festival in style.

The opening concert, organised by the Friends of Dereham memorial Hall, featured Andy Fairweather Low and the Low Riders, supported by the Dove and Boweevil Band. Chairman of the Friends, Tim Cara said they were delighted to have signed a leading British blues artist. “He is a class act, hugely in demand in his own right as well as having played with the very best on the world stage,” he said. “IT shows that Dereham and the blues festival can attract some of the very best acts in the UK to come and play here.”

Not only is Andy a seriously great guitarist and often employed by the likes of Eric Clapton, Roger Waters and Bill Wyman but his band is exceptional.  The playing was sublime and the audience lapped up their two set gig which paid tribute to rock, jazz, blues, country, soul and gospel before ending with Andy’s earliest hits Gin House Blues and If Paradise is Half As Nice.

July 2016 saw the fourth and the biggest Dereham Blues Festival ever, with more than 100 performances, over 45 bands and a total of 16 venues hosting some of the finest blues musicians in the UK. The opening concert, organised in partnership with the Friends of Dereham Memorial Hall was a sell-out and the audience of more than 350 people enjoyed an evening of sensational blues music and electric performances from headline act Dr Feelgood and his band, supported by the wonderful Rebecca Downes.

The evening was kicked off in style with the Heartlands Delta choir singing in the bar area before the main performance.

Now in its third year, 2015 brought the continued success of the Dereham Blues Festival (DBF).  Once again the launch concert was sold out before the festival began!

This year saw the award-winning Mud Morganfield take to the stage at Dereham Memorial Hall for what can only be described as an amazing and unforgettable experience.  The ever popular 32 strong Dereham Blues Festival Community Choir performed on the streets of Dereham to kick off the weekends best blues bands and artists in the the region and further afield play at the twelve venues.

This year we were very proud to host the amazing Paul Jones with The Dave Thomas Blues Band. The event was jointly organised  by NBS and The Friends of Dereham Memorial Hall. The  doors opened on Friday 11th for this unique, one off opportunity to see both Paul Jones and Dave's Band together on the same stage. The sell-out concert was a brilliant and unique experience enjoyed by all.

Some changes to the first year ensured everyone enjoyed non-stop blues with some amazing artists playing at numerous venues in the town centre for all to enjoy along with a free limited edition souvenir program.  It was great to see folk wandering down Dereham Streets heads buried in their programmes and planning which band to see where next.

Also new this year was the Dereham Blues Festival, Community Blues Choir, led by Lauren Dove. A four hour workshop was held on Saturday prior to the festival with the aim of learning three blues songs and 18 people took part and together they performed the songs at various locations on the Festival Saturday morning to the delight of Dereham shoppers. The choir was vey popular and moves are afoot to make it a group that meets regularly with street performance in mind. 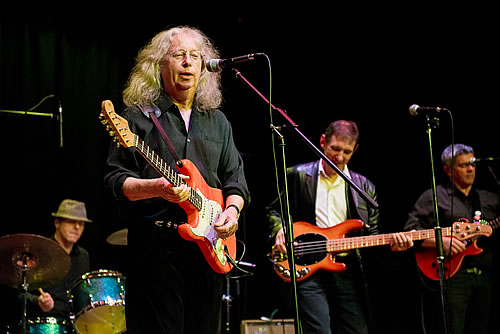